By Cyann Alfred: As schools nationwide welcomed their students back to the third consecutive academic term, Vieux Fort  comprehensive Secondary School opened with a bang, celebrating the triumph of their very own track and field superstar, Naomi London.

London, a third form student, represented St. Lucia in the 2022 Carifta Games, finishing sixth in the 100m Girls U17, second in the heats and third in the semi-finals.

With thunderous applause and radiant smiles, Naomi, accompanied by her family were
welcomed by her peers and the rest of the school’s population. 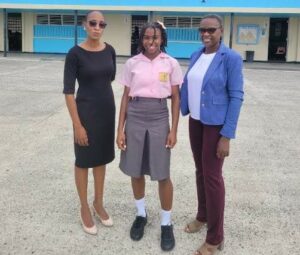 The pair voiced their appreciation and admiration to Naomi and in no uncertain terms encouraged pupils to put their best foot forward in any endeavors they undertake.

The celebration, however, did not end there.

A fellow teacher, Mr. Jawahill then serenaded Ms. London and her family with a harmonious trombone composition.

Naomi expressed her gratitude for the overwhelming love and support she had received after receiving a bouquet of flowers and a token of appreciation from her homeroom sponsor, Ms. Edwards, and Physical Education teacher, Mr. Elien.

She left the students with a few words to contemplate, noting that despite challenges, they should always be grateful for the opportunities and lessons learnt.

Students and staff alike at our prestigious school congratulate Naomi on her achievements
and future endeavors.

We are the home to stars perfecting their shine to illuminate the world.

Editorial Staff
Our Editorial Staff at St. Lucia Times is a team publishing news and other articles to over 200,000 regular monthly readers in Saint Lucia and in over 150 other countries worldwide.

Pierre Says SLP Is “Already On The Campaign Trail.”

Get our headlines emailed to you every day.

ABOUT US
ST. LUCIA TIMES is a news website owned by the public relations company Big Feat Media. Our aim is to provide Saint Lucians and others at home and abroad with professional, accurate, reliable and unbiased news and information with a special focus on Saint Lucia while maintaining our high website standards and professionalism. View our Privacy Policy.
Contact us: stluciatimes [@] gmail.com
FOLLOW US
© Copyright 2022 - St. Lucia Times. A Big Feat Media Production.
Send this to a friend